The second Monday in October is recognized each year as Indigenous Peoples’ Day. To honor this holiday, we’re taking a look at the original inhabitants of New Jersey — the Lenape people, who left their mark on the area in a variety of ways. Interestingly enough, Essex County is one of the few counties in the state without any municipalities deriving from their language. Instead, place names exist as schools, neighborhoods, rivers, roads, and train stations. Read on to learn about Essex County’s Indigenous people, their history, and their impact on the area.

All About the Lenape

The Lenape, also known as the Lënapeyok, Lenni Lenape, and Delaware, are an Algonquian language-speaking Indigenous people native to Lenapehoking. Lenapehoking, meaning the “homelands of the Lenape,” comprises the entirety of New Jersey, eastern Pennsylvania, New York City, Long Island, New York’s Hudson River Valley, and a portion of Delaware. The Lenape language belongs to the Algonquian language family, specifically the Eastern Algonquian subgroup. The Lenape of New Jersey spoke Munsee and Unami. Those who inhabited Essex County were Munsee speakers who had many sub-tribes such as the Yantacaw, Acquackanonk, Rumanchenank, Tappan, Hackensack, and Pompton, which were spread out across North Jersey.

Read More: The History of the Jersey Devil

The Lenape in Essex County

European settlement of Essex County and surrounding areas would not be possible without the routes, trails, water sources, mountains, and landscape molded, used and understood by the Lenape. Much of what we know regarding the Lenape of this area comes from archaeology and European accounts.

The Lenape of our area were hunter-gatherers who heavily relied on fish and game. They ate turkey, deer, bear, clams, oysters, lobsters, and mussels as well as corn, squash, nuts, roots, and berries. They used the Watchung Mountains for its abundance of natural resources, fantastic vantage points, and rich soil. The soil allowed them to raise a variety of crops, the numerous trees served as lumbar, the wildlife provided sustenance, and the high vantage points allowed them to communicate using smoke signals as well as survey the land. The mountains weren’t their only farmland; they also farmed fields and meadows such as the Great Piece Meadows. Sometimes they would burn these fields and meadows, pushing deer into the rivers and making them easier to hunt. Model of a Lenape Settlement on the Banks of the Passaic River — 1620 (Photo Credit: The Indians of Newark Before the White Man Came by Alanson Skinner, 1915)

Near Brookdale Park and Yantacaw Brook Park lived the Yantacaw people, a sub-tribe of the Lenape. Once a year, the Yantacaw would partake in an annual ceremonial dance. As their crops grew and it was too early to hunt, they traveled east toward the Passaic River to catch fish.

As they traveled, they gathered in the area where the Third River flows into the Passaic River. At this celebration, they camped for a few days, danced, thanked their gods for their harvest, drank, raced canoes on the Passaic, and feasted with their brethren. At this celebration, the Yantacaw were not alone, Lenape from other tribes such as the Raritan, Tappan, and Pomptons were in attendance. Historian and Nutley local Frank Speer narrowed this site to the Federal Telecommunication Laboratories in Nutley, which was demolished in 1996, and the land sold to a real estate company. Today, the Cambridge Heights Apartments sit where the Yantacaw used to meet.

In 1666, Robert Treat had settled with the Lenape on the purchase of the Newark area. Robert and his Connecticut community exchanged gunpowder, lead, axes, coats, guns, pistols, swords, kettles, blankets, knives, beer, and breeches with the Lenape for land. Over the next four decades, the Lenape and Europeans lived in Essex County — not together, but simultaneously. By 1700, the Lenape had been pushed westward into Horseneck (present-day Fairfield). Four decades later, most of those who remained left to join the Six Nations in New York. Some legends state that the last Lenape to leave the area was in 1761, while another account says 1801.

Around 16,000 Lenape live in Wisconsin, Oklahoma, and Ontario, Canada. The Munsee-speaking people primarily live in Ontario and Wisconsin. As of 2019, their language is critically endangered with only two native speakers remaining. Other Lenape live in the Northeast US — such as the Nanticoke Lenni-Lenape, whose headquarters is in Cumberland County, and the Ramapough Lenape Nation headquartered in Bergen County. Both groups are state recognized, but not federally.

There are many in Essex County with anecdotes of finding arrowheads within their yard or patch of earth such as Peter Pollio. Over three decades, Peter uncovered over one hundred arrowheads on his land in Fairfield which is now held by his son Paul. If you are interested in seeing arrowheads in person, then visit Morgan’s Farm House and Museum in Cedar Grove. Over the years, those who farmed the land uncovered numerous arrowheads which now sit in the museum’s collection, and some are typically on exhibit. Lenape Arrowheads + more at the Newark Museum (Photo Credit: (Photo Credit: The Indians of Newark Before the White Man Came by Alanson Skinner, 1915)

The Essex County Environmental Center in Roseland houses replicas of the Lenape wigwams in their Lenape Learning Center. Those interested in the original people of Essex County can visit to learn more about the Lenape as well as the land they live on.

Montclair State University is offering a Native American and Indigenous Studies (NAIS) Minor. The program has been brought to action with the help of Brianna Dagostino, a Nanticoke Lenni-Lenape tribal member and 21’ graduate, as well as Professors Christopher Matthews and Elsbeth Martin.

In Verona’s town center, there is a sign reading, “Ancient Native American Trail Marker”. This green sign in front of the library pays homage to the Lenape, pointing out a trail of theirs that crossed Bloomfield Avenue and was used for trade and travel. With trade and travel came people and goods — thus, many artifacts were found in this area of Verona.

Washington Street and Glen Ridge Avenue in Glen Ridge, Northfield Avenue and Old Indian Road in West Orange, Market Street and Washington Street in Newark, and Clinton Avenue and Stuyvesant Avenue that go through both Newark and Irvington run along original Lenape trails as well. South Orange Avenue, extending from Newark westbound to the South Mountain Reservation, was also a Lenape trail. These trails were narrow in nature, as the tribes typically walked in single file.

The strongest and most consistent reminder of the Lenape in our everyday lives is in place names. Perhaps the station you commute from every morning’s name is derived from the Lenape people and you might not even realize. Several schools, recreation centers, roads, parks, bodies of water, and neighborhoods have a Lenape name. Many Lenape place names have been lost over time, but those that remain should be remembered.

The Nishuane Trail was used by the Yantecaw tribe of the Lenni-Lenape who lived in the vicinity. Nishuane is believed to come from a Lenape word meaning “two streams.” There may have been a sagamore named Nishuane as well. Nishuane Elementary School, Nishuane Brook, and Nishuane Park in Montclair derive their names from this word.

Lackawanna is a Lenape word meaning “stream that forks.” Local namesakes include Lackawanna Plaza in Montclair, Lackawanna Avenue in Newark, and Lackawanna Place in Bloomfield and Millburn. Click here to hear the pronunciation of the word in Lenape. Lenape means “original people” or “real person.” Namesakes of the word are Lenape Drive in Roseland and Lenape Road in Livingston. The most notable namesake is the Lenape Trail, which runs through Essex County and connects county parks + reservations. Click here to hear the pronunciation of the word in Lenape. Oratam or Oratamin was a sachem or sagamore of the Hackensack of the Lenape whose territory included much of Northeastern New Jersey. As a leader, he was vital in the negotiations for the land sale of the Newark area to Robert Treat in 1666. Oratam is believed to be buried in Wyckoff. The Essex County Park Commission chose to name the North and South Oraton Highway in East Orange after him. The First Landing Party of the Founders of Newark erected in 1916 in Newark also bears his name.

For some time after 1666, the Lenape and Europeans both lived in the Newark area. The Lenape had a camp in present-day Monte Irvin Park in East Orange. This camp was named for Chief Perro. Perro, a sagamore, acted as a proxy with the advice and consent of Oraton for the negotiations of the sale of Newark. Several blocks north of the park is Parrow Street, named for this campsite.

Passaic derives from the Lenape word pahsayèk or pasaeck meaning “valley” or “place where the land splits.” Namesakes include the Passaic River, which forms Essex County’s eastern and western borders, as well as Passaic Avenues in Nutley, Belleville, West Caldwell, Fairfield, Livingston, and Roseland. Bloomfield has a West and East Passaic Avenue. Newark’s Passaic Street runs north and south along the river. Click here to hear the pronunciation of the word in Lenape.

The Pompton, Pamapon, or Wampings were a sub-tribe of Lenape. Their name is thought to mean “a place where they catch soft fish.” These people lived along the Pompton and Pequannock Rivers near present-day Paterson. Pompton Avenue, which runs through Verona and Cedar Grove, derives its name from this word.

Rahway is believed to derive from the name of a tribal chief Rahwack or from the Lenape word nawakwa, meaning, “in the middle of the forest.” The Rahway River runs through West Orange, Orange, South Orange, Maplewood, and Millburn. 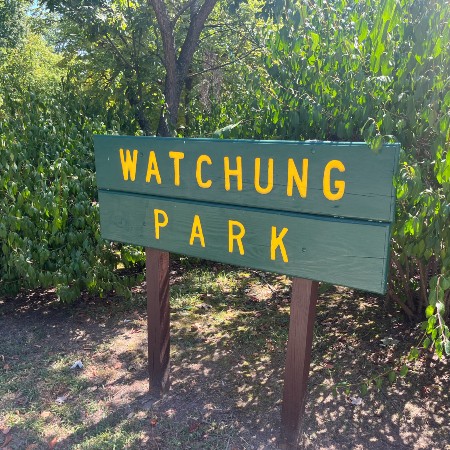 Watchung comes from the Lenape word òhchunk, meaning “hilly place.” Within Essex County, this word is seen in Watchung Park, Watchung Elementary School, Watchung Plaza, Watchung Train Station, and Watchung Avenue in Montclair. There is also a Watchung Avenue in Glen Ridge, Bloomfield, Orange, and West Orange. The most notable namesake for Watchung is the Watchung Mountains, which run through Millburn, West Orange, Verona, Montclair, Cedar Grove, Roseland, West Orange, and North Caldwell. Click here to hear the pronunciation of the word in Lenape.

Many Lenape lived in wigwams, which were round houses made of organic materials. The Wigwam Brook in West Orange and Orange derives its name from this. Click here to hear the pronunciation of the word in Lenape.

See More: The 1st Forward Pass in Football Was Thrown in Hoboken While Wyoming may be a state in the Midwest, it is derived from the Lenape language of the East Coast. Wyoming seems to mean “at the big river flat,” “large plains,” or “mountains and valleys alternating.” You will find this word immortalized in the Wyoming neighborhood of Millburn, which includes Wyoming Avenue, Wyoming Elementary School, Wyoming Club, Wyoming Train Station, and Wyoming Presbyterian Church. Wyoming Avenue runs through Millburn and Maplewood, becoming North and South Wyoming Avenue once it enters South Orange. Former namesakes are the Wyoming Weekly, Wyoming Harold, and the Wyoming Land Company, who organized the Wyoming neighborhood.