Home Essex County All About the Hamilton House Museum in Clifton, NJ

All About the Hamilton House Museum in Clifton, NJ

There’s an old stone house that sits on Valley Road in Clifton, located at 971 Valley Road. If you blink while driving down the road, you could miss it. The Hamilton House Museum is an 18th Century homestead, often overlooked between the campus of Montclair State and the entrance ramp to Route 3. This museum strives to act as a snapshot into the past of the Hamilton family, and each room symbolizes a different era throughout the farmhouse’s 200-year-old history. Read on to find out more about the Hamilton-Van Wagoner Homestead, a Dutch farmhouse museum in the heart of Clifton. 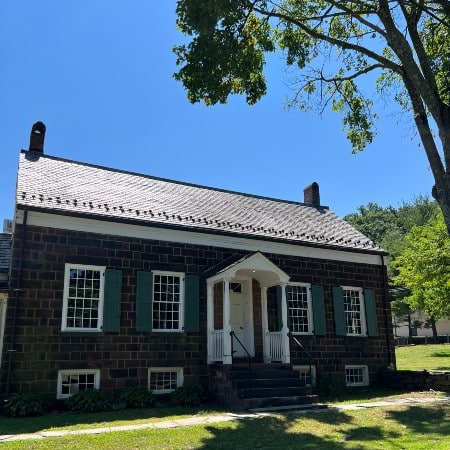 The History of the Hamilton House Museum

The City of Clifton wasn’t officially a city until 1917. However, the homesteader community had been settled in the area since 1679. This region was known as Acquackanonk Township and encompassed Clifton and parts of Little Falls, Passaic, Paterson, and West Paterson. A local Native chief named Captahem granted 11,000 acres to the Dutch homesteaders along the shore of the Passaic River. From that time on, the locals farmed successfully. The Hamilton-Van Wagoner Museum was built sometime in the 18th Century. It’s a gambrel-roofed home and is like those similarly made in the Netherlands at the time. The homestead features distinct architectural details from the Victorian, Federal, and Colonial eras. It is one and a half stories high, built from cut sandstone. The granary, spring-house, gardens, and outhouse are alongside the main house. The Hamilton family owned the 96-acre property from 1856 until the last descendant passed in 1970. That descendant, Harry Hamilton, gifted the homestead to the City of Clifton, which moved the home to its present location at Surgent Park. The homestead museum has six rooms, each designed to express a different era during life in the 200-year-old farmhouse. Research has been conducted to catalog the records and memories of Miss Caroline Hamilton. The museum features original artifacts, deeds, manuscripts, maps, photographs, and wills. The museum aims to “bring back memories of an uncluttered horizon with farms, orchards, fresh brooks, forests full of game, and filled with the scent of wildflowers.” The museum is open most Sundays from 2PM-4PM between March and December. Check their Facebook page for updates and special events. The property is open for wandering anytime during the week, and you can enjoy the exteriors of the buildings at Surgent Park.