In a move to promote tourism in the area, a new bill in the New Jersey legislature seeks to define the boundaries of Central Jersey. Central Jersey is often the butt of friendly ribbing from its North and South Jersey neighbors, querying whether Central Jersey does exist. The bill proposes defining the region for the purpose of promoting tourism. Read on to learn more about the proposed bill.

The bill was introduced this week by three Assemblymen who represent Hunterdon, Mercer, Middlesex, and Somerset counties. The goal of the bill is to get an official definition of what constitutes Central Jersey written into the New Jersey Division of Travel and Tourism’s laws. The bill also seeks to assign state and federal funding to the region. The bill proposes that the definition of Central Jersey be composed of Hunterdon, Mercer, Middlesex, and Somerset counties at minimum. A Central Jersey region would be included in all New Jersey tourism activities and publications.

In particular, the bill proposes that federal funds for tourism would be allocated to the regions that had suffered the most during the pandemic. “Any federal economic relief funds used by the division in support of tourism promotion will be used to benefit regions and activities most in need of economic relief after the COVID-19 crisis. The division will use the percentage of tourism decline in those regions or activities as the basis for how and where the relief funds are spent.”

MG looked for other places in the state law where a Central Jersey region could be defined. A 2019 law creating the High-Growth Industry Regional Apprenticeship Development Grant Pilot Program said, “The central region shall include Burlington, Hunterdon, Mercer, Middlesex, Monmouth, Ocean, and Somerset counties.” 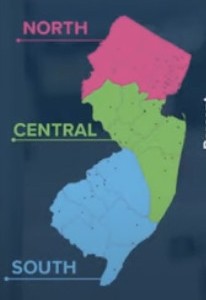 During the pandemic, the New Jersey Department of Health would refer to ‘the Central region,’ but MG was unable to find a definition for what exactly that meant. A screengrab from a presentation on May 20th, 2020 shows a map used by the state that included Hunterdon, Mercer, Middlesex, Monmouth, Somerset, Ocean, and Union counties as the Central region.

The proposal will no doubt stir up the age-old debate about what counts as Central Jersey, or if it even exists. 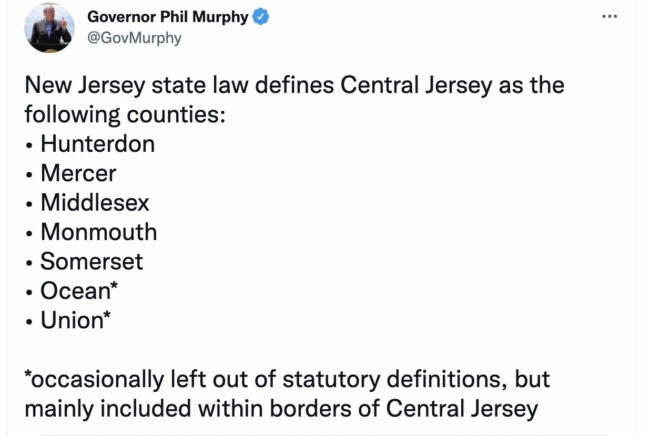 Even NPR has investigated this issue, going back to the state’s colonial roots. The native Lenni Lenape had divided the region into three areas, including, you guessed it, Unami, or ‘people down the river’ in central Jersey. European settlers in the 1600s divided the state into an East Jersey and a West Jersey. There was so much chaos in the settlement that the landholders gave up on it and yielded governance back to Queen Anne in 1702. It’s possible that if this bill is passed, the definition of Central Jersey will be solidified once and for all.