From the very rooms that our country was established in, to restaurants that have been open and operating for over a century, to vibrant parks and museums, Philadelphia’s culture is remarkable, to say the least. It’s also one of the most history-filled cities in the nation. The famed and historic concept of life, liberty, and the pursuit of happiness was birthed in this city. Read on for a guide to must-try things when visiting the City of Brotherly Love. Taking a photo with the Rocky statue perched at the bottom of the stairs at the Philadelphia Museum of Art and running up the museum’s nearly 80 stairs throwing your arms up just as Rocky did in the movie is a right of passage. Don’t just stop at the top of the Rocky steps, visit the Philadelphia Museum of Art that was completed in 1928. The museum hosts some of the best art collections that the tri-state-area has to offer. Aside from the must-see exhibits like the South Asian Collection, the museum hosts discussions from experienced historians, educational activities for children, a costume and textile study, a vast library, and more. The admission is $25 per adult.

Many buildings within the national park were a part of the American Revolution and the founding of the nation. Independence Hall is where the Declaration of Independence and the United States Constitution were created. The first and the second Bank of America are on the property, and as well as more historic landmarks. Guests can take guided tours of the park. Across the street from the park is the State House bell, later renamed the Liberty Bell, which originally hung in Independence Hall. It was made in 1751 in London and cracked on the first test ring. In 1846, the bell was repaired for George Washington’s birthday holiday and metal workers widened the thin crack to prevent its further spread. The inscription is from the Bible (King James version): “Proclaim Liberty Throughout All the Land Unto All the Inhabitants thereof.” The quote provided a rallying cry for abolitionists wishing to end slavery. Betsy Ross is famous for making the first American flag in her house in 1870. The Betsy Ross House is known as the birthplace of the American flag and the house itself has been kept in its original state for historic purposes. Guests can take guided tours of the house and learn about her life and the process of making the flag. The museum carries cutting-edge contemporary exhibits, educational experiences, and public programs. The current exhibition, Philly’s Freedom: Artists Speak Out, features more than 75 works of art that explore what freedom means to 50+ artists as they use stories, reflections, and images to inspire visitors to see freedom and liberty as an ongoing, shared human goal. It is open for self-guided tours with new hours, and timed-entry ticketing. 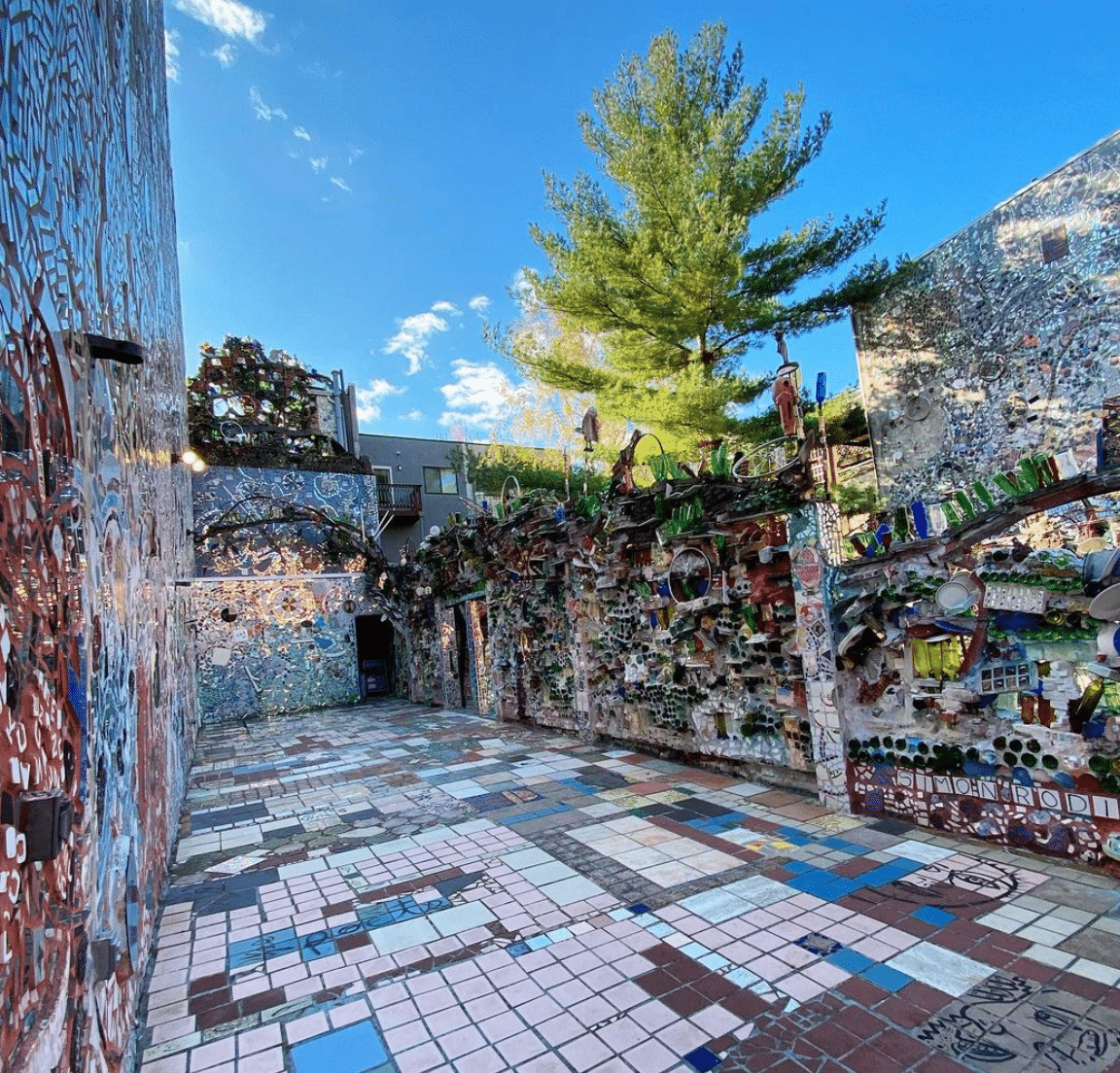 Philadelphia’s Magic Gardens is made up of two indoor galleries and a two-level outdoor sculpture garden that is covered in mosaics. In 1991, the artist used glass bottles, bicycle wheels, tiles, and international folk art to chronicle his life. In 2008, the property became open to the public.

Read More: These 10 Rooftops in the Tri-State Area Are Must-Visits

South Sreet is the prime shopping area in Philly with over 400 small businesses down the avenue on the left and right sides. From fashion boutiques, street-style shops, shoe stores, and amazing vintage clothing stores, it’s impossible not to find something special. Explore the used book stores, comic shops, and record stores for hidden gems. Or, make an appointment to get ready for the weekend at one of the many hair and nail salons and tattoo parlors. This park is officially named John F. Kennedy Plaza but was nicknamed LOVE Park because of the iconic Robert Indiana 1970 LOVE sculpture. However, the one in this park is a reproduction. It is a public park that’s in the middle of the city, just minutes away from City Hall. The sculpture is nestled in front of a beautiful foundation, making the perfect backdrop for a picture. America’s first zoo was ready to open on July 1, 1874. The zoo is home to almost 1,300 animals, including many rare and endangered species. Every year, the zoo educates more than 1.2 million visitors about animal and environmental conservation via a first-in-the-world animal travel trail system. From water life to big cats, and a primate reserve, the zoo is a must-visit destination. Admission is $23 per adult. The Shofuso garden is a traditional 17th century-style Japanese house and garden located within Philadelphia’s West Fairmount Park on the site of the Centennial Exposition of 1876. The historic site and museum include a hill and pond garden with a waterfall, koi fish, a tea garden featuring a traditional tea house, and a courtyard garden leading to a bathhouse. Admission is $12 per adult.

The Delaware River waterfront is the perfect place for an evening stroll, a place to grab a bite at the many restaurants lining the strip and enjoy the attractions. Be wowed by the view of the Benjamin Franklin Bridge that connects Philadelphia to New Jersey. The Cherry Street Pier, Race Street Pier, and Schuykill River waterfront park and walkway are also must-visits.

Mural Arts Philadelphia is the nation’s largest public art program. The Mural Arts Program has brought artists and communities together through artistic collaboration. The program has aimed to transform public spaces and lives through inspiring artwork. It’s essentially an outdoor gallery. Philadelphia is known internationally as the “City of Murals.” This former American prison in Philadelphia is now a historic landmark. It operated from 1829 to 1971. The penitentiary is known for the revolutionary system of separate incarceration first introduced at the Walnut Street Jail, which practiced principles of reform instead of punishment. Notorious criminals like Al Capone and bank robber Willie Sutton were held here. Currently open as a museum, guests can take a guided tour. The Barnes Foundation is an art collection and educational institution. The mission of Barnes is to promote the advancement of education and the appreciation of the fine arts and horticulture. Philadelphia art collector Albert C. Barnes (1872–1951) chartered the Barnes Foundation in 1922 to teach people from all walks of life how to look at art. Over three decades, he collected some of the world’s most important impressionist, post-impressionist, and modern paintings, including works by Renoir, Cézanne, Matisse, and Picasso. The was the first farmers’ market when it opened in 1892. This historic indoor market is home to more than 80 vendors offering all kinds of food. The market itself has an old-timey feel that is very charming with neon lights and vintage signs throughout that make it exciting to walk up and down the rows of eateries. Operating since 1979, this local gem has been serving up authentic cheesesteaks that are sure to make anyone go back for more. The original location is a small  “hole-in-the-wall” filled with all of the charms of the city. There is a walk-up window and a handful of stools available to eat inside. There are now two locations, the second being much bigger. In addition to a cheesesteak, order the half-lemonade, half-grape “Gremlin” drink, and Spanish fries.

More Spots for Cheesteaks, of Course: Geno’s, Jim’s, and Pat’s

A 2019 list from The Daily Meal included this restaurant in the nation’s top 75 hole-in-the-wall restaurants. Geno’s, located at 1219 S 9th Street, Jim’s South Street located at 400 South Street, and Pat’s King of Steaks located at 1237 E Passyunk Avenue are all nationally-recognized as must-try stops for authentic cheesesteaks in town.

See More: How to Spend a Day in Newark, New Jersey

This is America’s oldest outdoor market located in the Bella Vista and Passyunk Square communities. The community has almost 200 businesses spanning over 20 blocks ​from Fitzwater Street at the north through Wharton Street at the south. From seafood spots to bakeries to butcher shops to pizzerias, there is something for everyone. Since 1945, John’s Water Ice has been serving the community refreshing water ice and ice cream from family recipes passed down through generations. Located in the heart of Bella Vista, the water ice flavors are all homemade and all-natural using real fruit and fruit juice, no syrups or artificial flavors. This long-standing restaurant has been shucking oysters since 1947. Oyster House is known as one of the best raw bars in town and for good reason. Patrons can expect fresh seafood, a-buck-a-shuck oysters, and $3 oyster shooters during happy hour, all in a chic, nautical environment. That’s right, patrons can indulge in Nan Zhou hand-pulled noodles at this charming restaurant in the heart of Chinatown. The guest selects whether the noodles are broad or narrow, thick or thin, and orders an assortment of condiments and greens for a unique customized experience. The menu is extensive with endless options of apps, soups, stir fry, and rice dishes. Suraya is an award-winning, all-day, spacious market and chic café, restaurant, with an outdoor garden. The menu consists of traditional Lebanese ingredients. The flatbreads and kebabs are must-tries. Founded in 1997, this high-end restaurant serves up a popular brunch, American cuisine, and craft cocktails in a modern space located in the Old City neighborhood. It’s known for its seasonal menu, so be sure to check out what’s on offer in each season. Ralph’s has been open and operating since 1900. This establishment has been passed down from generation to generation, cooking must-try southern Italian dishes. Ralph’s withstood the test of time, having survived the Great Depression, prohibition, and two World Wars. Theodore Roosevelt, President Biden, our very own Frank Sinatra have dined here. This Mexican fusion restaurant was featured in season five of Queer Eye. The restaurant is owned by husband and wife duo Tlacopilco and Alama who endured many struggles to keep the business running before the cast revamped the restaurant and helped the couple get back on their feet. The menu mixes American breakfast and brunch standards with Mexican and seafood dishes, including crab and corn chowder. The sandwich section includes a mollete, a salmon burger, and since it’s in Philly, roast pork with broccoli rabe and provolone. Patrons can find authentic Thai cuisine at this eatery as well as shop in its sister market just a few blocks away in the heart of the Italian Market. Each dish is inspired by the owner’s home-cooking growing up. There is daily outdoor seating and it’s a BYOB. Zahav is a go-to for Israeli cuisine and hospitality. Laffa bread baked comes with every meal served alongside hummus and salatim. A must-try dish is the pomegranate lamb shoulder and of course, the award-winning desserts. Patrons can enjoy a cold Lemonanna, a cocktail, or a bottle of boutique Israeli wine.

Victoria is MG's Associate Editor and Social Media Coordinator for the Hoboken Historical Museum + Fire Department Museum. She is a born and bred Jersey girl with deep roots in Hoboken and Jersey City. When she’s not touring delicious restaurants and attending events in the Hudson/Essex area, she’s exploring everything the Concrete Jungle has to offer. You can catch her at art exhibitions, local festivities, traveling, diving into a new book, thrifting, or indulging in some form of arts and crafts.