A List of Historical Places to Visit in North Jersey

As one of the 13 original colonies, New Jersey is a state with a rich history because it is one of the oldest provinces. While there’s plenty of interesting history to unearth in Montclair alone, the northern New Jersey region is full of historical sites and areas with even stronger remnants of the “olden days” which offer a glimpse into NJ and US history. To get you started on a historical tour of the state, we’ve rounded up 17 places to visit in northern New Jersey to learn more about the Garden State’s history. The Central Railroad of New Jersey was once the gateway to America for many immigrants entering the United States through Ellis Island. The train station used to have routes that ran throughout New Jersey and beyond – to neighboring states Connecticut, Pennsylvania, Delaware, Maryland, and Washington DC. Now, the train station is a small, free museum highlighting the station’s history and the history of Ellis Island, the Statue of Liberty, and the Hudson River. From the train station, you can get ferry service to Ellis Island and the Statue of Liberty for an even deeper dive into history.

Ellis Island and the Statue of Liberty | Jersey City

Visit both Ellis Island and the Statue of Liberty on the same day to immerse yourself in the history of not just New Jersey but also the history of the United States of America. Once an active immigration center, Ellis Island was the greeting point for millions of men, women, and children traveling to the U.S. for freedom and shelter. Visiting the Statue of Liberty is an unforgettable experience, as well. Travel to the top of Lady Liberty and take in breathtaking views of the Hudson River, New York, Jersey City, and beyond. 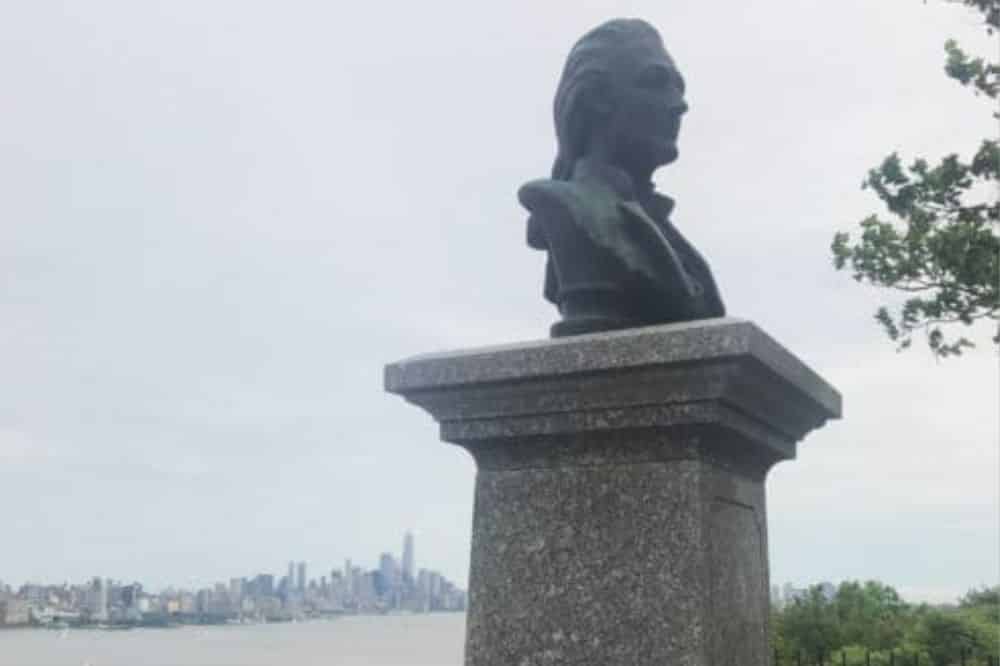 Back in the 1800s, problems weren’t solved over texts and sealed with a hug. “Dueling” was the primary way for men to settle differences. Seriously, it was normal to travel by foot or boat (from NYC) to Weehawken for a dueling match. This space, now a park, was even home to a historic fight between Alexander Hamilton and Aaron Burr (we got you, Hamilton fans) that led to Hamilton’s death the following day. Modern day, a positive perk of visiting this site: great views of NYC!

Initially home to Elias Boudinot, (president of the Continental Congress who signed the peace treaty to end the Revolutionary War), Boxwood Hall is a residence that George Washington once visited on his way to his inauguration as the first-ever President of the United States. The house was later sold and became home to the youngest signer of the Constitution, Jonathan Dayton.

The Thomas Edison National Historical Park, located in West Orange, is home to America’s greatest inventor’s house and laboratory, which are restored to their original condition and available for the public to visit. These labs are where motion picture cameras, sound recordings, silent and sound movies, and many more incredible inventions were developed by Thomas Edison. Check out the Thomas Edison National Historical Park website for visiting information. 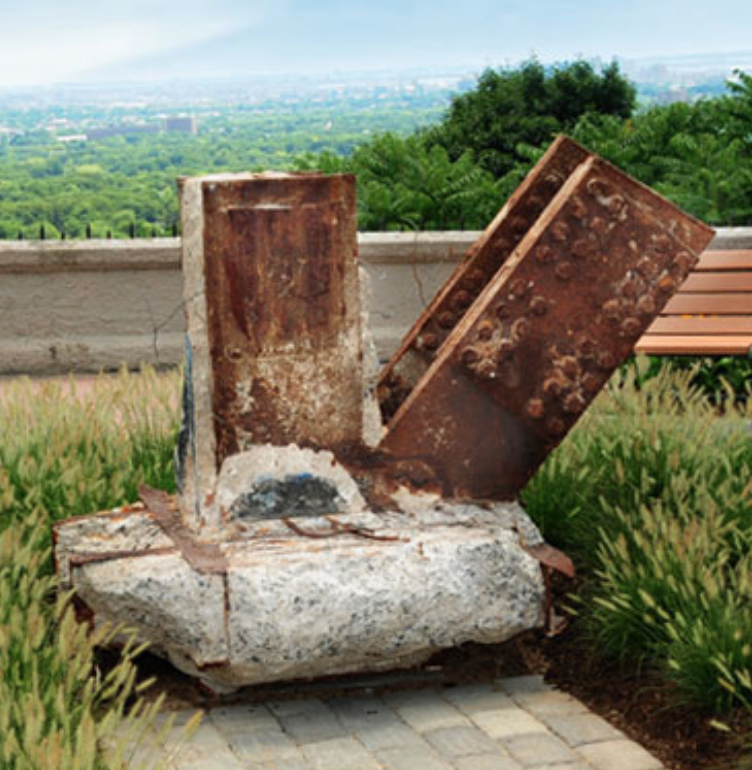 In an elevated land area in West Orange, George Washington and his troops once strategized how to win our country’s independence during the Revolutionary War. The location made a perfect overlook spot and allowed the U.S. troops to spy over British camps. Years later, the land gained the nickname “Eagle Rock Park” as a large boulder atop the reservation was a popular perch for eagles. Fast forward to 1903. The park was a backdrop for the first-ever motion picture, The Great Train Robbery, filmed by Thomas Edison. Eagle Rock Park was later developed in the early 1900s, and in 1911, construction finished on the building atop the land. It was built in the “casino” style, meaning the first floor was an open-air room. Now, the building is home to the Highlawn Pavilion, a popular venue, and restaurant. Originally built in 1752, the Steuben House is a five-room stone cottage situated in the “New Bridge” area which was an important battleground, military headquarters, and intel-gathering post during the Revolutionary War. It became a short-term headquarters for George Washington and his troops after its owners showed their loyalty to Britain and fled to British-held Manhattan. The house gained its name after the State of New Jersey presented the abandoned house to Major-General Baron von Steuben in 1783. The State of New Jersey bought the house in 1928. The Bergen County Historical Society opens the house for special events.

Alexander Hamilton, the first Secretary of the Treasury, was adamant about the United States building industry after the Revolutionary War ended. He co-founded the Society for Establishing Useful Manufactures (S.U.M.), a manufacturing group operated by individuals with backing from the government. In 1792, this organization purchased over 700 acres of land above and below the Great Falls and established Paterson, named after NJ Governor William Paterson. S.U.M. was responsible for the early development of water power systems for industrial use, thanks to the Paterson Great Falls’ power. Now, the area is a beautiful place to walk around and explore.

The Lambert Castle introduces some art history to this list of historical places to visit in northern New Jersey. Catholina Lambert, a wealthy English immigrant, and silk entrepreneur – built the house in the fashion of an old English castle and named it “Belle Vista.” The luxurious interior of the home and Lambert’s ever-growing and impressive collection of paintings and sculptures drew many famous visitors, including former presidents. In 1925, the City of Paterson bought the building from Lambert’s son and later in 1934, established a museum and library, which is still accessible to the public, in the building.

George Washington made his way around northern New Jersey during the Revolutionary War. The Dey Manor was another place that he and his troops called their headquarters for a short period (3 months) in 1780. Theunis and Hester Dey built the mansion in 1770, and the home remained in the family until 1801. Varying constituents owned the house until 1930 – when restoration of the property and building began by Charles Over Cornelius, an architect and former decorative arts curator at the Metropolitan Museum of Art. While visiting the home is temporarily off limits, the grounds are open for visitation and exploration. It is operated by the Passaic County Department of Parks and Recreation. It was at this seven-acre property, now a National Historic Landmark, that Samuel Morse and Alfred Vail introduced the telegraph to the public. The Historic Speedwell boasts a three-story telecommunications museum. Along with the museum, the area to explore includes 18th-century buildings with exhibits and a park featuring ironworks, a walking trail, a waterfall, and a lake. Please note that this is temporarily closed to the public at this time but will hopefully reopen soon.

Another National Historic Landmark to visit on our list, Ringwood Manor, has historical importance for various reasons. According to the website, the land on which the manor sits is confirmed to have been commonplace for a diverse mix of Native Americans. The Ringwood Manor became a large estate where NJ families spent their summers and was eventually donated to the State of New Jersey as a museum and a state park. According to its website, the “original historical structures, gardens, and landscapes on 582 acres and extensive historical collections illustrative of family life, community, industry, and culture are a unique repository of American history.”

Hopatcong State Park is nine miles long, and its focal point, Lake Hopatcong, is a popular New Jersey destination for fishing, boating, and swimming. On land first inhabited by Native Americans far before history was written, the park is historic by way of how early settlers on the land used it. The park was originally developed for practical purposes – to support the Morris Canal waterway that acted as a primary source of transportation for zinc, coal, and iron across NJ in the mid-late 1800s. When the NJ railroads began development, the waterway (and thus the energy from Lake Hopatcong that fueled the waterway) was less needed. Now, Hopatcong Park is a beautiful place to spend the day. There is a historical museum at the park that highlights the lake’s history, the Morris Canal, and Native American history.

The Delaware Water Gap is located in western, northern New Jersey and borders Pennsylvania. The area is now used for recreational activities but has a significant history. Throughout the park are impressive Native American archeological sites, structures that have lasted from early Dutch and colonial settlements remains of rural villages, and landscapes of frontiers from the French and Indian War. Now, the region is a popular destination for vacationers looking for beaches, hiking, and gorgeous landscapes.

Grover Cleveland, the 22nd President of the United States, was born and raised in this house in Caldwell, New Jersey. The first floor still portrays the house as it was laid out in 1837.

The Kingsland Manor is a museum that showcases life in the 1700s. It is listed on the New Jersey and National Registers of Historic Places and is maintained by the Historic Restoration Trust of Nutley. The manor is named after Major Nathaniel Kingsland of Barbados, who became the landowner of much of northern New Jersey in 1668 — and he lived in this house. For visiting hours and more information on the Kingsland Manor and its unique role in NJ history, check out the website. Waterloo Village is a restored, 19th-century village and NJ historical site featuring working sawmills, a general store, iron-working shop, and several historic houses that highlight the life of Lenape Indians (the regions’ earliest settlers) to the establishment of the Andover Mine (the area was rich with iron) in the early 1700s.