There is something about sunny, warm weather and a chilled beverage that pairs well with fresh seafood. Considering Essex County isn’t too far away from the shores of both New York and New Jersey, we’re not surprised by the number of restaurants dedicated to highlighting all the surrounding waters have to offer. Read on for a guide to the best seafood restaurants in Essex County. Crabulous is a Cajun and Creole seafood restaurant specializing in boils. Crawfish, crab legs, squid, clams, or another shellfish/crustacean of the diner’s choice gets tossed into a bag with corn, potatoes, and seasoning then baked until everything is tender. There are several luscious seafood pasta to choose from, as well as a lobster roll from the sandwich menu. For all things lobster, go no further than Jack’s Seafood Shack. It has everything from lobster rolls to lobster grilled cheese to lobster mac and cheese to lobster bisque. Even the weekend brunch menu is filled with lobster. The best part is, Jack’s is open all year round, so the deliciousness doesn’t have to end just because summer does. This Walnut Street staple is the perfect place for a date night or intimate celebration. Start the evening with some oysters and crab cocktail from the raw bar or sushi selection and then try the sea scallops or paella as entrees. Don’t forget the flourless chocolate cake for a sweet ending! Bloomfield Steak and Seafood House family owned and operated, and serves up an eclectic mix of dishes like ceviche, Thai chili shrimp, and lobster tails. The large outdoor patio is the perfect setting for enjoying a meal outside or having a few cocktails and appetizers. The only way to get seafood fresher than at Caldwell Seafood Market & Cafe would be to catch it yourself. The team picks up its stock daily from Hunts Point NY. Start with bacon-wrapped scallops and oysters Rockefeller and then sample a little bit of everything with the mixed grilled seafood platter, which has lobster tails, scallops, shrimp, and octopus. This bright and airy restaurant in the heart of the Ironbound district adds a Portuguese twist to its seafood-centric menu. Cockles, steamed octopus, codfish cakes, and paella are classics from the Iberian region that shine at Allegro. Pro tip: The Seafood Lovers Festival is a tower for two and can easily be shared by four people as an appetizer.

Brisas Del Mar Cevicheria is an Ecuadorian restaurant where ceviche really shines. Ceviche is raw fish cured with the acid from citrus juices it’s marinated in. The menu spotlights many styles of ceviche, from the classic to the creative –go with the classic cold shrimp or conch ceviche, or a combination of both. To try something hot instead, the encebollado (“oniony” in English) is a traditional fish stew made with yucca root and topped with pickled onions. 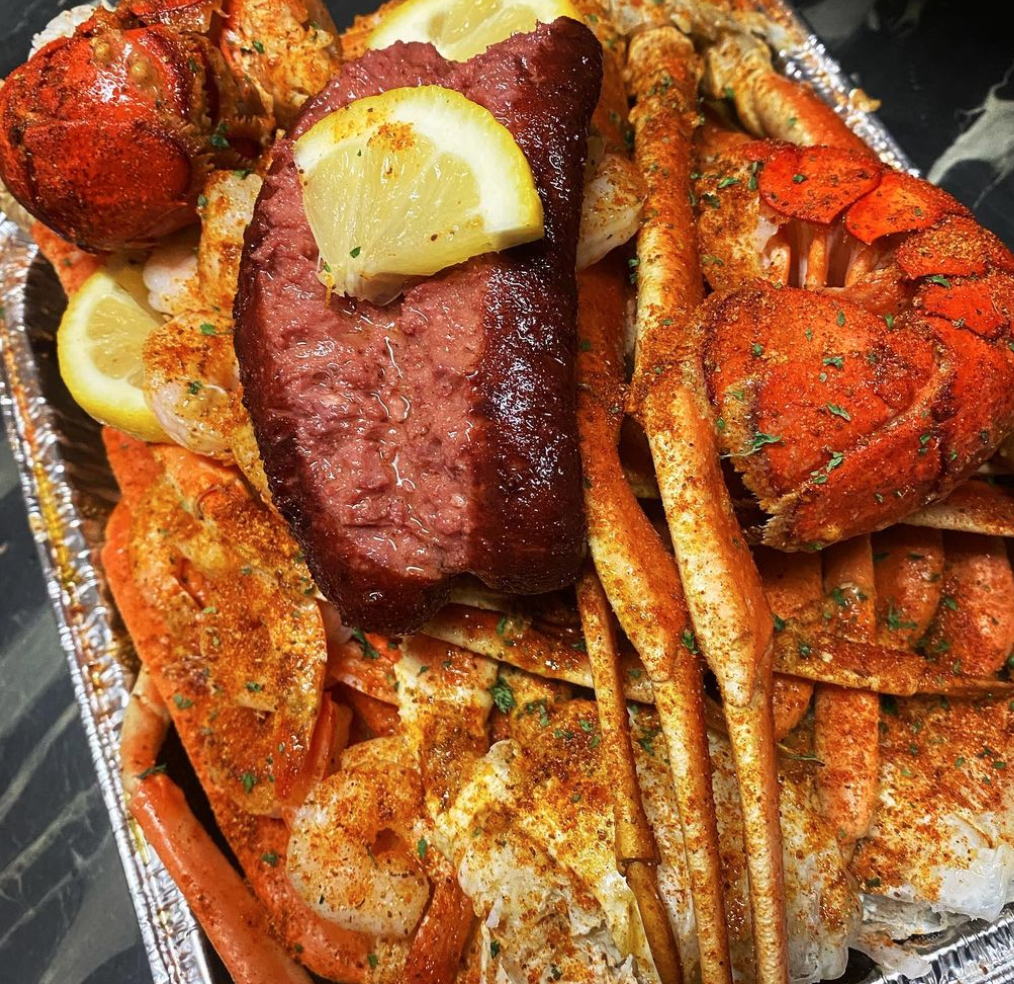 Crabs on Thee Way is part restaurant, part hookah lounge, and 100% flavor-filled. The crab leg clusters are smothered in generous amounts of garlic and butter, an order of crispy Cajun-spiced fries gets topped with creamy crabmeat, and the rasta pasta (creamy jerk sauce) is topped with blackened salmon or even lobster tails. This restaurant is the definition of “luxurious seafood”, their slogan, and the team has plans to open a second location in Bloomfield later this summer. Just Beclaws is a seafood boil restaurant with its own take: it combines traditional Vietnamese and Cajun flavors into one delicious net of your favorite seafood. The Vietnamese and Cajun combo might sound crazy but, Vietnam was once a French colony and the Cajuns are descended from French settlers. Both cultures love seafood and big flavors, and we’re all the better for it. Pick from a list of various types of crab, shrimp, and mussels among others, then choose a sauce like lemon pepper, garlic butter, or Old Bay, finish it off with a little heat, add a few sides, and voila. Red Crab is newly opened in 2021 and is pulling out all the stops to make a splash with a large selection of seafood prepared in every which way possible. Think raw oysters, creamy soups, crispy fried shrimp baskets, steamed whole lobsters, mixed seafood plates of pasta, and more. There is live entertainment most weekends to accompany the dinner crowd. Newark has been home to Seabra for over thirty years and it was one of the city’s first restaurants in the Ironbound district to focus on seafood. The Frutos do Mar is a huge appetizer with a sampling of just about everything:  clams casino, shrimp in garlic sauce, shrimp kabobs, mussels in red sauce, lobster tails, clams in garlic sauce, and stuffed oysters. For an entree, the mariscada is a tomato-based stew inclusive of lobster, clams, shrimp, mussels, and scallops and a fan favorite.

Sitting at one of the tables at Sol-Mar will transport patrons to a sun-soaked beach on the coast of Portugal. The grilled seafood combination will be the star of the dinner table with samplings of mussels, lobster tails, shrimp, grilled fish, and clams. Split it with friends and with a couple of sides, it might be the perfect meal. Other stars on the menu include the mariscada (seafood stew) in green sauce and the paella. Even after eating two or three times at PF Seafood Market and Restaurant, there would still be quite a large part of the menu left to try. A selection of fish and scallops can be chargrilled and served with escarole and beans — simple, yet delicious. In the entree section, the crab and lobster stuffed flounder as well as the fresh fettuccine with wild shrimp and scallops get our vote as favorites. This national chain started in the South to celebrate the spirit of a backyard seafood boil with friends and family while letting the chefs do the work. Pick a catch from the expansive list of options, then add a sauce, spice, and extra sides and it will be brought out to the table in a steamy bag. There are also crispy po’boy sandwiches and fried seafood baskets on the menu. In Jersey, it’s hard to pass on a local Italian restaurant and even more so, one that has as much seafood as this. Patsy’s offers personal pies and Roman (square) style pizza with unique toppings like the Vongole, which comes with fresh littleneck clams, parsley, and melted cheese. For an entree, try the Sicilian calamari ripieni: calamari stuffed with chianti braised tomatoes and served over white beans, capers, olives, pine nuts, raisins.