Home Lifestyle A Firsthand Experience of a Cross-Country Amtrak Trip

A Firsthand Experience of a Cross-Country Amtrak Trip

Anyone who has traveled recently has probably noticed that air travel is a bit chaotic at the moment. A record number of flights are delayed, airlines are understaffed, and supply chain delays are having an effect on the readiness of new aircrafts. All of this has led to travelers experiencing long lines at security and check-in, inconvenient travel times, high ticket prices, and an epidemic of negative attitudes about flying. Some vacationers are now opting to travel domestically and take a road trip to avoid the airport entirely. However, there is one method of travel is often overlooked and underestimated: the train. Whether you’re trying to avoid the frustration of air travel or just don’t enjoy flying in general, a cross-country Amtrak train trip can be a great resource full of beautiful views to explore the continental United States. MG writer Lauren Alberti took a train trip from North Jersey to Chicago to Denver, Colorado — and she’s sharing her firsthand experience with us. Read on to learn about what it’s like to take an Amtrak train from New Jersey to Denver. From New Jersey to Denver Via Train: One Gal’s Cross-Country Journey on Amtrak

Almost all major US cities are accessible via Amtrak, the nation’s largest passenger rail system. Train travel offers a very different perspective than flying. Though many may wonder why an 18-hour train is better than a 3-hour flight, I’m a big believer that taking the train turns the journey into part of the vacation. It’s no longer just about reaching the destination, but also about enjoying the ride itself. Traveling via train offers time to sit back, relax, and enjoy the US countryside as it passes by, a view that is not typically experienced by travelers. The key to enjoying long distance train travel is to think of the train as a moving hotel. This is not like an ordinary commute to work; this is where you will be sleeping, eating, brushing your teeth, and waking up for the next day. I found that over-anticipating my arrival made the trip feel much longer and ultimately made the experience less of a joyful ride.

When planning a cross-country train trip, the first order of business is choosing accommodations. On Amtrak trains, there are two options for on-train seating: a regular coach seat — similar to an airplane seat — and a sleeper car, which is a small private space with bunk beds, a private bathroom, shower, and of course, a window to see the sights. The coach seats are spacious and do not have a middle seat, which is always a plus. They also recline all the way back, making for an easy transition to sleeping on an overnight ride. For those on a budget (like I was), a sleep mask and neck pillow make the more affordable coach seats way more comfortable. Because there is no direct route from New York to Denver, my trip was split up into four separate train rides: NYC to Chicago, Chicago to Denver, and then the opposite route back home. I chose to spend a few days in Chicago and explore the city before venturing off to Colorado. This helped break up the trip a little bit.

I started off in Hoboken, so it all began with a PATH train ride from Hoboken to 33rd Street in Manhattan, where I then walked to Penn Station on 34th Street. For those traveling from other areas of North Jersey, taking the most convenient train or bus to New York Penn is the way to go.

From there, I got on the Amtrak Lake Shore Limited Line, which leaves from Penn Station daily and lands in Chicago after an overnight trip through the midwest. On this ride, we went up the Hudson to Albany, NY — where we were allotted a short “fresh air break” to stretch our legs — then rode through western New York, Ohio, Indiana, and Illinois. The landscapes are breathtaking and the sunset over the farmland was like living in a postcard.

While watching the New York mountains turn into the cornfields of the midwest, I decided to take advantage of the observation car that is on each Amtrak train. The observation car is primarily made up of large windows that feature panoramic views of the landscapes. Anyone is welcome to sit in the observation car, and seats are first-come, first-served, so make sure to plan ahead when anticipating important landmarks. 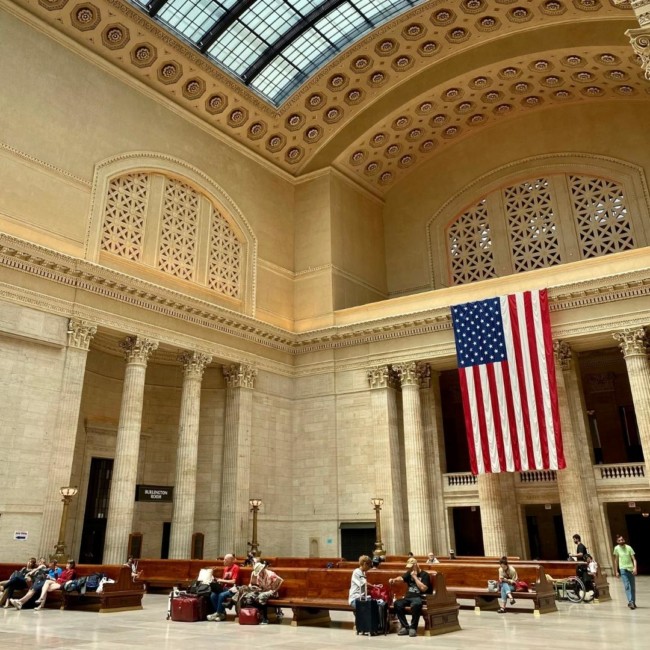 Below the observation car was the dining car. While the food on board is passable, if I were to take my trip again, I would pack additional food so as not to rely on the dining car and ultimately save some cash. The dining car is open for a majority of the day and is closed during the overnight portion of the trip. Options include breakfast sandwiches, oatmeal, cereal, deli sandwiches, salads, snacks, sodas, coffee, tea, juice, and much more. On my four trips, I created a mini ritual of ordering a coffee and breakfast sandwich from the dining car and taking it to the observation car to watch the sunrise each morning.

Before arriving in Chicago, I watched the sunrise over Lake Erie, passed through Cleveland, Ohio, and rode around the tip of Lake Michigan. After a short stay in the Windy City, my next train ride was on the California Zephyr, another Amtrak line. This train goes from Chicago all the way to California, but I would be getting off halfway in Denver, Colorado. I watched Illinois cornfields pass me by; took a fresh air break in Omaha, Nebraska; rode over the Mississippi River; and landed over 3,000 feet above sea level in Denver. 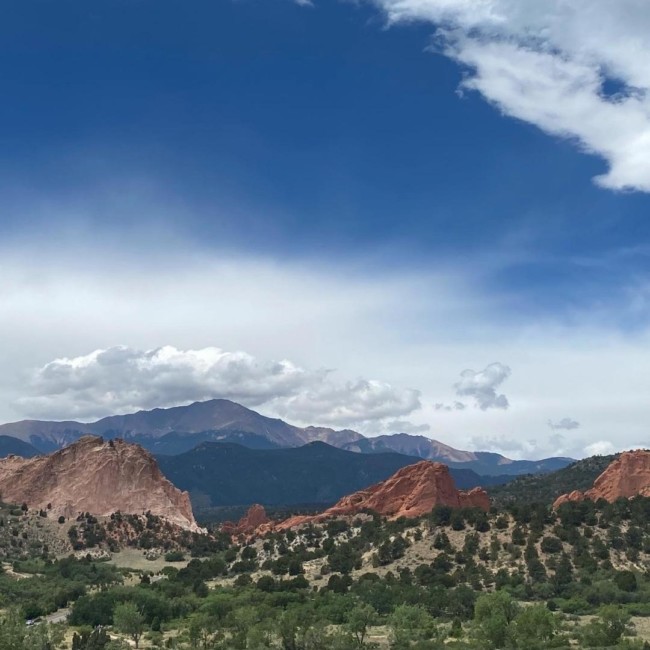 While my trip consisted of spending time in only two cities, when traveling via Amtrak, the possibilities are just about endless. Travelers can hop on and off in hundreds of cities around the country and even some cities in Canada. Amtrak offers vacation packages that include multi-city trips and overnight accommodations at affordable rates. Some packages include a loop around the country, stopping at several major cities before ending up back wherever you started.

Another notable aspect of train travel is meeting fellow train passengers. The train is filled with people who appreciate the journey and can see the value in taking a longer trip to get to their destination. Most people (especially the midwesterners) will strike up a conversation with the person next to them and want to learn about where they are going and where they are coming from. While on my trip, I sat next to several people who had interesting stories about what brought them on a 20-hour train ride. One passenger had a weak heart and was not cleared to fly by his doctor. Another used to take these long rides with her dad and still enjoys taking them periodically as an adult. Just about everyone I talked to spoke with passion about how the train ride was such a unique experience that most people don’t take advantage of. There’s an almost tangible feeling of camaraderie with fellow passengers. In a way, it doesn’t really matter where you came from or how you got here; we are all on this journey together and everyone wants to enjoy the ride.