Home Events + NewsEvents An Inside Look at The Radio City Rockettes

An Inside Look at The Radio City Rockettes

The holidays are here, which means it’s time for time-honored holiday traditions. One, in particular, that’s on North Jersey families’ to-do lists is visiting New York City to check out the decorations, bright lights, and the Rockefeller Christmas tree. It’s also that time of year to buy tickets to the highly-anticipated Radio City Rockettes’ “Christmas Spectacular” show that’s been around since 1932. In honor of the musical dance show that kicked off on November 18th, The Montclair Girl spoke to present and past dancers to get an inside look at making the team. Read on for MG’s exclusive interviews with the Radio City Rockettes. Auditions for the Radio City Rockettes take place in the spring and summertime. Those who are auditioning must be at least 18 years old, 5’5”-5’10 ½”, and be proficient in ballet, tap, and jazz. Pointe work is a plus but not required, and all dancers are required to sing as part of the audition. (P.S. The height requirement was changed this year; it used to be 5’6”.)

Dani DeAngelo, co-founder of Jane DO who was a Rockette from 2001-2007, told MG that the height range of the dancers plays a significant role in creating the illusion that all the Rockettes are the same height. Dani, who auditioned three times before making the cut, shared, “Other than the height requirement, the ability to perform the choreography and maintain the strength and endurance needed to get through the intensity of the rigorous schedule is more important.”

Jacey Lambros, co-founder of Jane DO who was a Rockette from 2002-2012, added, “Beyond talent, it takes resilience and persistence to get to the top.”

Read More: Where to See Views of the Manhattan Skyline in Essex County The Montclair Girl exclusively learned that over 800 people auditioned in 2022 and only 18 made the cut. The final count is different each year and depends on who returns, but either way, all returning dancers must audition each year since a spot isn’t guaranteed.

Kristen Smith, a current Rockette who’s been on the team since 2013, told The Montclair Girl during a special dance class to celebrate the Rockette’s partnership with QVC, “We get over 500 women from all over the world that come in and audition. I heard it’s a 1% chance to make it on the line — it just really depends on how many spots are open.”

When asked for advice on auditioning, Kristen shared, “I would say persevere and never give up on your dreams. I’ve been wanting to be a Rockette since I was 3 years old and it took me three auditions before I finally got my spot — and what kept me going was my determination to be among the line with beautiful, unique Rockette sisters and now I’ve been here for 9 years and it’s a dream come true.” Dani broke down her top 5 tips on becoming a Rockette:

Leading up to the first show of the season, the dancers are in rehearsals six hours a day, six days a week for one-and-a-half to two months. Once the season starts in November, the girls have to perform up to four shows a day. 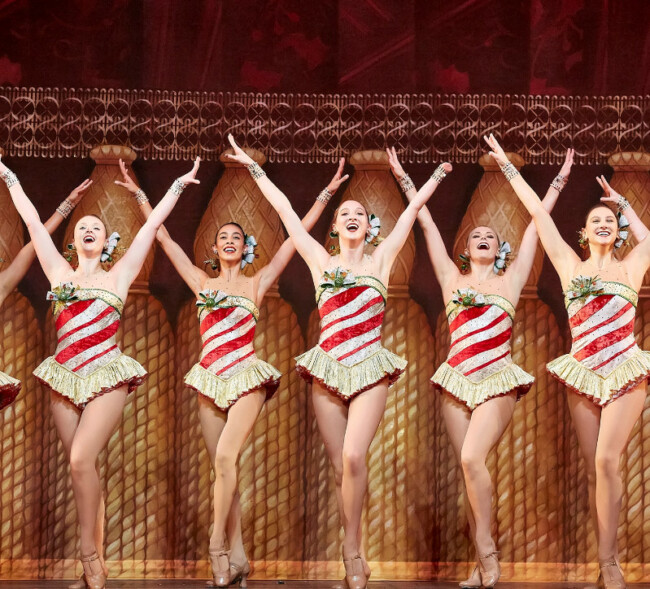 Dani called her time on the Rockettes the “most rewarding and challenging thing” she’s ever done. She’ll never forget her first year as a Rockette, which was when she was 19 years old. “Every routine had a prop, a track pattern that looked like a marching band sequence, and 90-second costume changes. The hours were long and my body was tired,” she recalled. “But the first time I walked onto that stage and did that first eye high kick the Rockettes are known for, you know ALL the hard work was worth it because you DID IT. All of the years of sacrifice, dedication, persistence and work paid off.”

Alicia Lundgren, a current Rockette who’s been on the team since 2014, gave The Montclair Girl some advice: “We rehearse so many hours in the day, so many times a week that it is important to put your best effort in for rehearsals and shows. I would also say because we’re such a strong sisterhood that it really counts and helps to be a kind person… being just a kind person in general really helps to support and uplift each other.” The Jane DO co-founders agreed that camaraderie among the team goes a long way and were some of the fondest memories of being part of the Rockettes. Jacey said, “The time between dance numbers when you’re high-fiving the stagehands. The moments during the show when you wink at your friend across the stage… Slap happy sharing stories, playing games, and making each other laugh.”

Apart from being seen on stage in the “Christmas Spectacular,” the Rockettes become celebrities in themselves, especially during the holidays. They make appearances during the Macy’s Thanksgiving Day Parade, the Christmas Tree Lighting ceremony, events around NYC, and appear on news channels across the country.

Dani, a New Jersey native, told us, “Being able to say you are or were a Rockette is a badge of honor. People used to say to us, ‘OMG you’re a Rockette? You’re SO lucky,’ to which we would respond, ‘Luck had nothing to do with it. It was HARD WORK!’ The Rockettes will always be a group of bad a$$ women who have worked their lives to earn the title.” Jacey added, “Being a Rockette teaches you that there is no substitute for hard work and that there is so much power in a group of women coming together with a unified purpose. We hold those same values today at Jane DO.”

Both Dani and Jacey shared their thoughts on how the Rockettes have changed over time. “The brand has continued to evolve and find new ways to utilize technology, social media, and modernize choreography and storyline while maintaining its tradition,” Dani said.

The “Christmas Spectacular” is a “completely different show each year,” which makes it more exciting for the audience who returns each year to see what the troupe has been working hard on. From the musical acts to the eight costume changes during the show, the Rockettes are constantly surprising guests at Radio City Music Hall. To date, there have been over 69 million audience members graced with the presence of the Rockettes. “I think that’s the beauty of this show, just it being new every year but also very traditional in terms of we have iconic numbers such as the parade of the wooden soldiers that’s been done since 1932,” Alicia shared. “So I think it really has something for everyone.”

The current Rockettes spilled that there’s “gorgeous immersive new numbers” happening this year and even a “newly reimagined number: the dance with the frost fairies.” Kristen teased, “It completely turns Radio City into a magical winter wonderland and it gives you the feeling of that first magical snowfall and there’s actually fairy drones that fly above the audiences’ heads so it’s amazing.”

This year, the Radio City Rockettes partnered with QVC to bring shoppers a special collaboration of bundles and curated assortments inspired by the “Christmas Spectacular.” Shoppers can visit www.rockettes.com/qvc for an exclusive ticket offer.